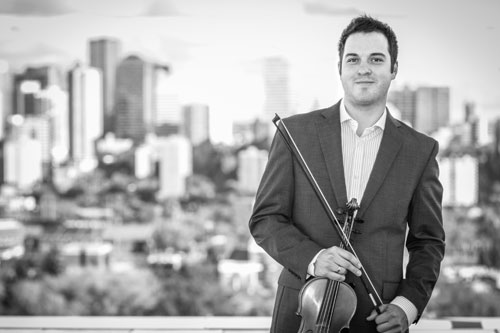 Daniel has been playing the violin since the age of five. He plays a variety of fiddle styles, jazz and classical violin. Daniel completed a Master of Music degree in classical violin at the University of Alberta studying with Dr. Guillaume Tardif. During his studies, Daniel was awarded a prestigious research grant from the Social Sciences and Humanities Research Council of Canada (SSHRC).

Daniel has had the opportunity to perform at many prestigious events including the 2012 London Olympics as a cultural ambassador of Alberta, a reception at Carnegie Hall in New York City, and the Smithsonian Folklife Festival in Washington, D.C.

In anticipation of our eventual reopening, the Yardbird Suite is happy to continue to present local musicians broadcasting live to your home.

We broadcast live from the Yardbird Suite. There are no audiences other than the performers and audio technicians who are physically distant, do not share the same equipment, nor come into contact with each other. Every effort has been made to comply with AHS safety guidelines.

If you missed some of the broadcasts, or want to watch again, please visit our Youtube page.

When the live stream has started, check back here to watch. If you don’t see the video, please go to our virtual page.