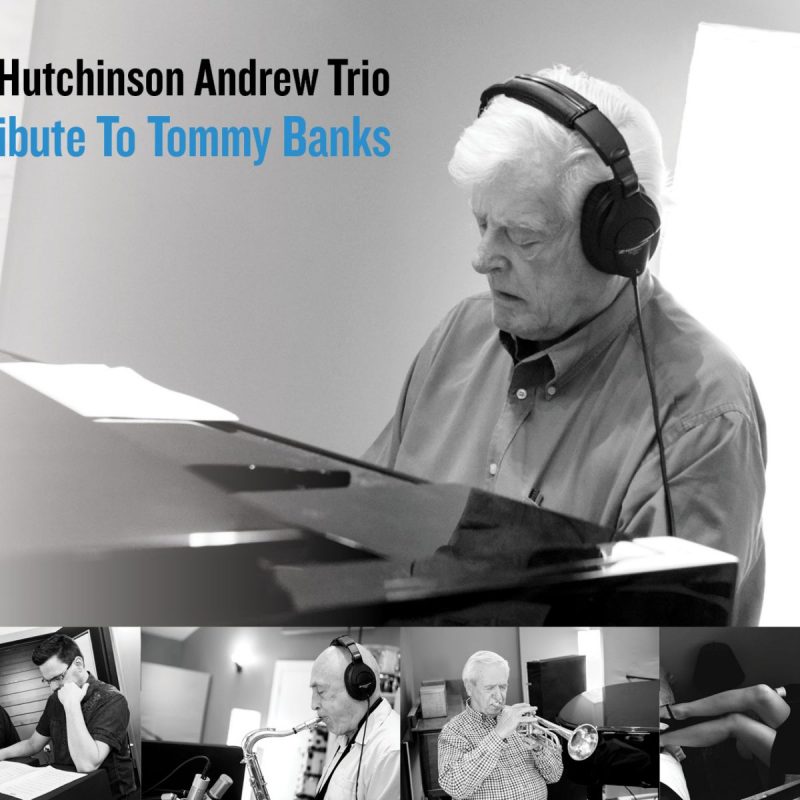 The Hutchinson Andrew Trio (HAT) is looking forward to getting back onstage for some special shows this coming December in tribute to the late, great Hon. Tommy Banks.

As one of western Canada’s musical icons, Tommy had a great effect on the careers and approach of all the members of HAT as well as countless others across Canada. In celebration of what would be his birthday, the Hutchinson Andrew Trio will be joined by close friends and colleagues of Tommy including saxophonist PJ Perry, trumpeter Al Muirhead and vocalist Mallory Chipman. The group will be performing music closely connected with this JUNO-winning master of the piano including some of his favourite tunes and his originals. Come join us for this celebration of Albertan and Canadian jazz icon Tommy Banks which will be livestreamed and recorded for future release on Chronograph Records!

The multiple-award-winning Hutchinson Andrew Trio is a vital and distinctively western force on the Canadian and international jazz scene. The group’s third album, 2013’s Prairie Modern, was featured in jazz bible Down Beat magazine, which called the album “a terrific listen, with great musicianship throughout.” Their most recent album, Hollow Trees, was written specifically for the seven-piece configuration of the HAT and the Lily String Quartet. Its music features powerful, moving compositions by HAT pianist Chris Andrew that combine the beauty of classical chamber music with the drive and interplay of jazz.

The trio’s many honours include Western Canadian Music Awards nominations for all for of their albums, and the prestigious TD Grand Jazz Award at the Montreal International Jazz Festival.

“a disciple of swing and improvisation…”

In 2007 PJ was awarded an Honorary Doctorate of Laws from the University of Alberta. In autumn of 1999 Justin Time Records released a JUNO-nominated recording of PJ and the Edmonton Symphony Orchestra. PJ Perry has become recognized by critics, colleagues and listeners as being one of North America’s premier saxophonists. Winner of a 1993 JUNO Award for Best Jazz Recording for his album My Ideal, PJ has received Jazz Report magazine’s Critic’s Choice Award for Best Alto Sax for a record-breaking seven years; from 1993 to 1999. In 2016 PJ Perry was awarded the Order of Canada by His Excellency the Right Honourable David Johnston, Governor General of Canada.

Al Muirhead has long been an iconic figure on the Canadian jazz scene. And the trumpeter, composer, arranger, sideman and recording artist has been making listeners take notice for longer than jazz fans might realize. Born in Regina in 1935, he was playing in the Regina Symphony and dance bands by age 12. Muirhead began to take notice of greats such as Dizzy Gillespie, Miles Davis, and Louis Armstrong. While Muirhead’s playing is infused with the indelible influence of the jazz giants, his flowing, melodic sound is his own — and has become influential in its own right. He unleashes melodies that are incredibly inventive and utterly timeless.

Muirhead has worked with legends such as Diana Krall, Paul Anka, Rosemary Clooney, Frank Mills and Dizzy Gillespie. In recent years, Al has been honoured with the American Federation of Musician’s Citation Award and the Western Canadian Music Alliance’s Heritage Award for his mentorship and industry-building. He has also earned the Saskatchewan Jazz Festival’s Special Recognition Award, a YYC Music Award, a 2016 & 2019 JUNO nomination, a 2017 Western Canadian Music Award nomination, and has charted #1 in Canada and #3 in the US.

The Edmonton-born Chipman has already made her mark on the jazz scene, with two critically acclaimed solo albums showcasing her dynamic voice. Her sound is a genre-obliterating sonic experience that seems to channel Frank Zappa, Joni Mitchell and Esperanza Spalding all at once, while lyrically exploring subjects both personal and political.

Having grown up with family members that included a grandfather who was a professional jazz pianist, a mother who loved New Wave and a father who was into ‘80s hair metal, it’s hardly surprising where Chipman’s eclectic tastes originate. She herself studied musical theatre and opera as a teen, later earning a Bachelor of Music degree and teaching voice at MacEwan University in Edmonton. Along the way, she has performed in venues across Canada and the U.K., even landing gigs as a backup singer for Heart, and on the Roy Orbison hologram tour.

The Honourable Tommy Banks was known as a pianist, conductor, arranger, composer, TV personality, actor, producer and politician (1936-2018). Tommy had an unparalleled, multi-faceted career spanning more than 60 years in virtually every aspect of the entertainment industry in Canada. A professional jazz pianist at age 14, he went on to lead his own bands, conduct symphony orchestras around the world, direct musical ceremonies at international events, host his own long-running television show, and act in film and television. He also served nearly 12 years in the Canadian Senate. Tommy was chair (1978–86) of the Alberta Foundation for the Performing Arts and chair (1983–87) of the music program at Grant MacEwan College, Edmonton. He was a member (1989–95) and a policy consultant (1996– 98) of the Canada Council, and the chairman of the Edmonton Concert Hall Foundation (1989–91). In 1999, Edmonton named a street Tommy Banks Way in his honour. In 2010, he received SOCAN’s special achievement award for his contributions to Canada’s music industry and musical heritage.