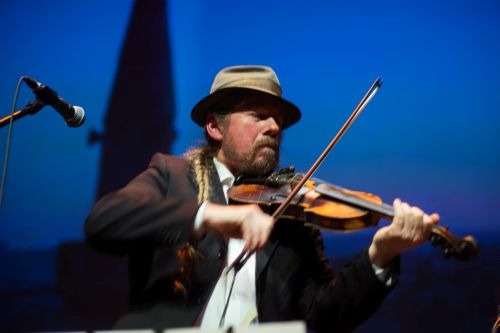 A long time fixture in the Edmonton music scene, Cam Neufeld has played his own style of fiddle music in clubs and festivals across the prairies and around the world. From the street to the concert hall, his musical journey has spanned the gamut of styles from traditional fiddling to jazz. Cam has journeyed many times over the last 10 years tracing the route of the Roma from India through Turkey, the Balkan’s, France and Spain and studying and composing music inspired by this journey. “The Road to Django” is a show that is based on these compositions and other melodies gleaned along the way. In addition, Cam leads the Gadjo Collective and performs with numerous groups in Edmonton as well as maintaining a private teaching studio. Cam has 2 solo albums and recently the Gadjo Collective has put out a CD called “Balkan Jam”. A second CD “The Gadjo Collective presents The Rd to Django” was released at Convocation Hall in January 2020. This show has been performed using as many as fifteen musicians and dancers to a solo show using foot rhythms and looping technology. The music is a seamless blending of traditional fiddle tunes with blues and jazz sensibilities flavoured with the sounds of the Roma trail, which begins in Rajasthan India and ends in Spain.

Cam has an instructional DVD called “Fiddle Improv” which was recorded on Vancouver Island with Doug Cox. He has two recordings of original music, “Beats Crime”, a collection of music that has been called “jug jazz”, and “The Cam Neufeld Connection – Live @ Bonnie Doon Hall”. This recording features musicians he has played with in various combinations and bands. The Cam Neufeld Connection plays original music that has been described as “a grab bag of tangos, jigs, waltzes, swing numbers and blues-all performed with verve and immaculate taste”.

This show will showcase Cams violin. Drawing on a large repertoire of original pieces, jazz standards and Balkan music, improvisation will be the glue that holds this diverse material together. From the singular voice of the violin in all its purity to soundscapes produced with looping technology, this show will take you on a journey that begins at home and transports you to the sounds of distant lands.