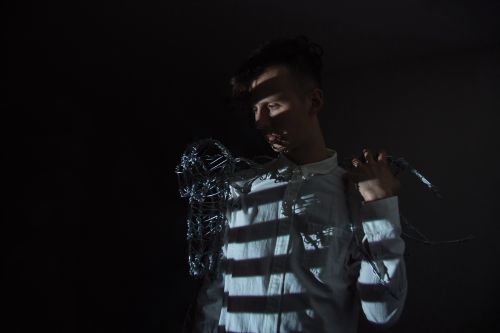 “Bloodless Arches”, the debut album from Brian Raine’s moniker Ways In Waves, was released on Bent River Records on June 15th, 2019. Three and a half years of work went into this record, with nearly all instruments performed by Raine at his home studio. The concept for the “”Bloodless Arches”” was inspired by a recurring dream from the point of view of a dying bird. The images from this dream are what eventually led to the creation of a wire-frame bird sculpture which was used as a model for the album cover, painted by Edmonton-based visual artist Lisa Jones.

Throughout the album, dense experimental production techniques are used to place the elements of a traditional rock/pop ensemble in a space that brings dreams into the forefront of the listener’s experience. Lyrically, tracks 1 to 9 carry us through the motions of having a bad day, along with all of the self-reflection that vulnerable moments of depersonalization can bring. Tracks 10 and 11 bring us through the dream, and through a life-story written for the bird. Themes of loss, guilt, disassociation, and hope are explored through stories, characters, and reveries. When writing lyrics for the songs, Raine imagined placing his compositions within physical spaces, such as a collapsing building (Preservationist), a polluted ocean (Vacant Drifters), or a hostile purgatory (Hurting Other People). These imagined locations then fuelled the creative techniques used when producing/mixing the album.

Normally, a Ways In Waves performance includes Geoff Li (guitar), Eric Wildeman (guitar), Connor Pylypa (bass) and Joel Joeske (drums) along with Raine on vocals and guitar. But for this performance, Raine will be reimagining the music of “Bloodless Arches” for his modular synthesizer, as well as delivering the lyrics via vocoder rather than singing. Working within the limitations that Covid protocols dictate has produced a unique opportunity to recreate these songs in a new light.

Raine also works as a freelance producer, with notable credits including co-production and performances on “Aquarian” by Mallory Chipman & The Mystics, as well as producing Brandon Wint’s upcoming “Freedom Journal: Antidotes to Violence” to be released late summer 2021.

If you would like to watch, and you are a member — please log in. If not, you may purchase a day pass or become a yearly virtual member at the link below.