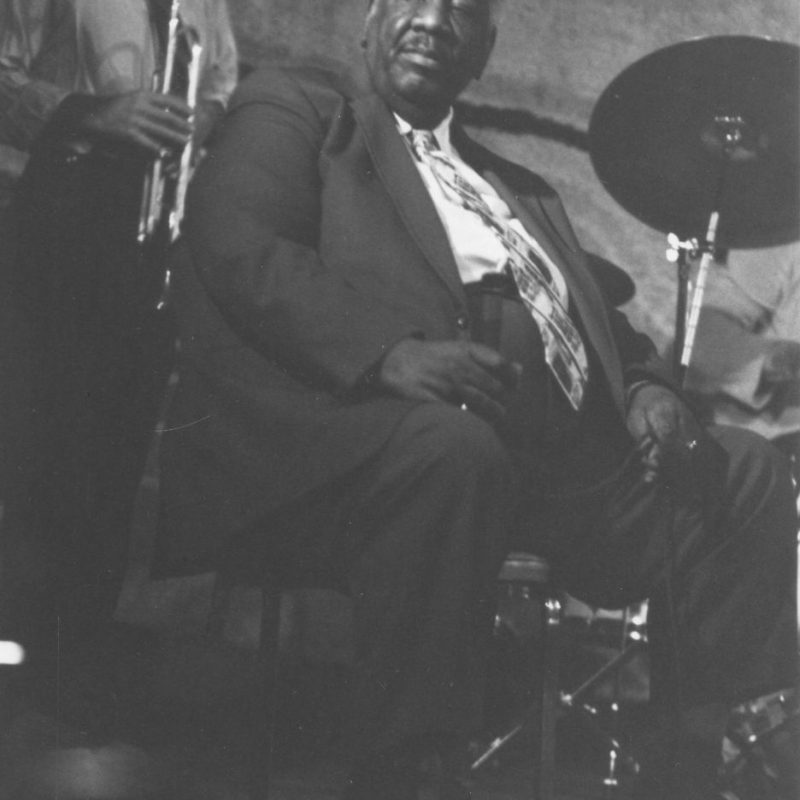 Featuring Dave Babcock and his Jump Orchestra
with Mallory Chipman.

Singer, trombonist and Edmonton jazz legend Clarence ‘Big’ Miller was born on December 18, 1922 and would have been 100 years old this year. On December 9th and 10th Dave Babcock and his Jump Orchestra, along with vocalist Mallory Chipman have the honour of celebrating Big’s remarkable life and musical legacy with a special centennial performance of songs he recorded, or was associated with during his career.

Big Miller was one of a kind, well known for his large stature, his huge voice and his big heart. Able to shout the blues or croon a ballad, he could take on any song and make it his own. Born in Sioux City, Iowa and raised in Topeka, Kansas, Big was the son of a preacher, brought up in the gospel tradition but he was soon drawn to the swinging blues infused music emanating from Kansas City in the 1930s and never looked back.

Though Big started out as a trombonist, he found his voice singing Stardust one night when the regular singer couldn’t make it. Big gained a reputation as a ‘blues shouter’ going on to sing in the bands of Lionel Hampton and Jay McShann, as well as the Fletcher Henderson Reunion Orchestra. He worked and recorded with trombonist Bob Brookmeyer, toured with vocalist John Hendricks and performed with Count Basie and Duke Ellington. Big recorded several albums under his own name on the Savoy, CBS and Columbia labels.

Big was much beloved in Edmonton, the city that became his adopted home in 1970 and where his musical legacy continues to bear fruit. Big often helped out aspiring musicians in city high schools and taught at MacEwan University and the Banff Centre of the Arts. He played a major role in the growth of the Edmonton Jazz Society and the Jazz City Festival. Big received an honorary doctorate from Athabasca University and the city park in front of the Yardbird Suite is named in his memory.

Members of the Jump Orchestra, including trumpeter Bob Tildesley, bassist Rubim de Toledo, pianist Chris Andrew and saxophonist Dave Babcock, all performed with Big earlier in their careers. The granddaughter of the great Tommy Banks, Mallory Chipman also has a unique connection to Big. Tommy and Big shared a special musical friendship, performing extensively in the ‘70s and ‘80s. Big’s vocals were often featured on Tommy’s wonderful arrangements, winning a Juno Award for their album “At The Montreux Festival” in 1979.

Jazz fans who heard Big Miller sing back in the day know how lucky they were and every Edmonton musician past and present owe him a debt of gratitude. This weekend’s musical celebration promises to be a swinging, joyful affair, just how Big would want it. It’s all part of the living tradition that jazz is and will give musicians and audiences alike the opportunity to celebrate the greatness that was Clarence ‘Big’ Miller. Happy 100th Big!